This week it’s St David’s Day and I have included a St David’s Day and all things Wales quiz. Welcome to the WEEKLY BLOG, available online and as a PDF download that you can print and take with you. Packed with additional content to assist quiz hosts, DJs and presenters.

1. What colour is the dragon on the Welsh flag?

2. What is the name of the tourist village in North Wales, designed and built by Sir Clough Williams-Ellis between 1925 and 1975 in the style of an Italian village, and is now owned by a charitable trust?

3. At which castle was Prince Charles invested as the Prince of Wales?

4. In which decade was Swansea given city status to mark the investiture of the Prince of Wales?

5. What flower is used as an emblem of Wales? 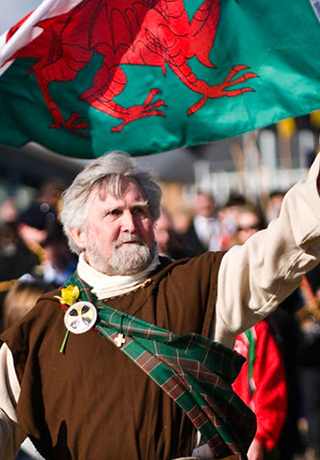 6. Haunted’ Gwrych Castle in North Wales was the setting for which 2020 TV series?

7. Stuart Cable was the original drummer with which Welsh super group?

8. Which English king was born at Pembroke Castle?

9. Which Welsh former world champion was nicknamed the Italian Dragon?

10. According to legend St David’s parents were which of the following? A miner and a teacher. A nun and a king or a shepherd and preacher?

I’m not sure if these new glass coffins will catch on? Remains to be seen!

Someone stole my limbo pole. Seriously, how low can you go?

I was at a ventriloquist’s funeral this week. We all joined in and sang his favourite hymn… ‘All Things Gright And Geautiful’.

1933 The film ‘King Kong’ opened in New York.
1936 The Hoover Dam was completed.
1969 Concorde made its debut flight.
1975 Charlie Chaplin was knighted by the Queen at Buckingham Palace.
1987 MS Herald of Free Enterprise capsized just after leaving the port of Zeebrugge killing 193 people.
1998 ‘Titanic’ became the first film to gross over $1 billion worldwide.
2005 Steve Fossett became the first person to fly an airplane non-stop around the world solo without refueling.
2017 The Nintendo Switch games console was released.